Ming Chiao
My name is Calvin Lee. I'm using the pen name of Ming Chiao to sign my blogs. I am a Surgeon and Acupuncturist in Modesto, California, USA. I love music and play some piano and violin. I recently had a chance to spend two months in the East (Hong Kong, Macau, and Taipei) playing some violin soloes with orchestras - I've blogged about these. All this happened after I participated in the YouTube Symphony at Carnegie Hall in New York City, USA. Here are some of my blogs which in general are random thoughts from my mind written in a loose style of writing (ie. no grammer or spelling checks). My blogging here is not intended to create a physician - patient relationship. In fact, you will find out that I'm very much human and not very good at everything - or most things for that matter. If you were my wife, you'd think I had serious deficiencies as a human. Oh I guess I should mention that my wife is famed plastic surgeon Dr. Tammy Wu. I hope you enjoy and comment on some of my blogs. The audio clip above is one of my violin playing back a few years (Tchaikovsky Violin Concerto played with the Brown University Orchestra) 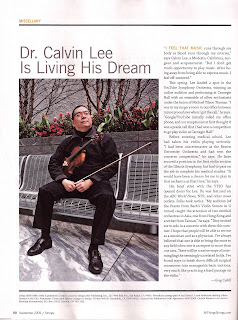 Dr. Calvin Lee
Is Living His Dream
"I FEEL THAT MUSIC runs through my
body as blood runs through my arteries,"
says Calvin Lee, a Modesto, California, surgeon
and acupuncturist. "But I don't get
much opportunity to play music. After being
away from being able to express music, I
feel off-centered."
This spring, Lee landed a spot in the
YouTube Symphony Orchestra, winning an
online audition and performing at Carnegie
Hall with an ensemble of other enthusiasts
under the baton of Michael Tilson Thomas. "I
was in my surgery room in our office between
minor procedures when I got the call," he says.
"GooglelYouTube initially called my office
phone, and our receptionist at first thought it
was a prank call that I had won a competition
to go play violin at Carnegie Hall."
Before entering medical school, Lee
had taken his violin playing seriously.
"I had been concertmaster at the Brown
University Orchestra and had won the
concerto competition," he says. He later
secured a position in the first violin section
of the Illinois Symphony, but had to pass on
the job to complete his medical studies. "It
would have been a dream for me to play in
that orchestra at that time," he says.
His brief stint with the YTSO has
opened doors for Lee. He was featured on
the ABC World News, NPR, and other news
outlets. Folks took notice. "My audition [of
the Presto from Bach's Violin Sonata in G
minor] caught the attention of two medical
orchestras in Asia, one from Hong Kong and
another from Taiwan," he says. "They invited
me to solo in a concerto with them this summer.
I hope that people will be able to see me
as a musician and as a physician. I've always
believed that one is able to bring the most to
any field when one is an expert in more than
one area. There will be creative ways of intermingling
the seemingly unrelated fields. I've
found ways to break down difficult surgical
maneuvers into manageable basic motions,
very much like practicing a hard passage on
the violin."
-Greg Cahill
Strings (ISSN 0888 3106) is published 12 times a year by String Letter Publishing, Inc., 255 West End Ave., San Rafael, CA 94901. Periodicals postage paid at San Rafael CA and additio nal mailing offices.
Printed in the USA. Postmaster: Please send address changes to Strillgs, PO Box 469120, Escondido, CA 920-!6-9020. Canada Post: Publications Mail Agreement #40612608. Canada Returns to be sent to
BJeuchlp International, P.O. Box 25542, London, OK N6C 682.
90 September 2009 / Strings ALLThingsStrings.com
----
Disclaimer: This website is not intended to create a physician patient relationship. There is no specific targeted medical advice here. Please see your physician in person. This disclaimer also applies to our other websites with generalized information: Plastic Surgery Modesto CA, Plastic Surgery Modesto, Cosmetic Surgery, Acupuncture Modesto, Veins Modesto, How to Choose a Plastic Surgeon, Breast Augmentation Modesto, Breast Augmentation FAQ, Tummy Tuck FAQ, Botox in Modesto
Posted by Ming Chiao at 5:27 AM